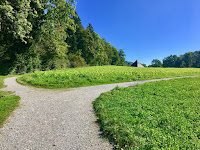 To go further, some believers accept evolution but believe a god had some controlling influence on the initial conditions and/or the outcome. This suggests that creation vs evolution isn't even a dichotomy at all, since these believers effectively believe in both. Some even refer to it as "Evolutionary Creationism".

Since evolution and creation are not the only options, proving evolution false does not automatically prove creation true, and vice versa. In fact without some empirical means of verifying or falsifying creation, there would be no way to even prove it false - even in principle - since every conceivable outcome could be interpreted as a confirmation of creation. To be clear, this is not a good thing for creationism, because the world would look exactly the same if creation was true as it would if creation was false, meaning there is simply no way to tell one way or the other.

This is not the case for evolution, and there are well documented ways in which evolution could be falsified. If any such evidences were found, the theory of evolution would need to be revised or perhaps even replaced with a better theory. Yet no such evidences have been found.

In order for creation to be proven to be true, it needs to be falsifiable and also stand on its own evidence. Would sorts of evidence would, if found, falsify creation?