About 7 years ago, I was disfellowshipped by the Christadelphians.

This is part 3 of my first-hand account of what it was like to be disfellowshipped from the Christadelphian religion that I had grown up in.

If you have not yet read part 1 or 2, you can do so starting here.


One last-ditch attempt to transfer

Following the Feb 16 meeting I sent a further email clarifying several points that had been raised in the meeting. The two men seemed intent on misinterpreting everything I had said regarding my beliefs. Whether through malice or incompetence, I cannot tell. Probably the latter but with everything else going on, who knows? In particular they seemed to have a lot of difficulty accepting that the Bible could still be considered "inspired" without God literally dictating the exact words to the human authors. I didn't think it was all that difficult to comprehend, but any deviation from the "exact words" belief seemed like heresy to them. I tried to explain that we only have translations of copies of the texts anyway and that we don't have any access to those "exact words" regardless of whether or how it was inspired, but I was wasting my time.

Below is my final email offering clarification and requesting a transfer. Yes, my language regarding inspiration was deliberately vague but that was exactly the point. I wasn't going to affirm a belief in something the Bible never even claimed, and I didn't think I should be required to. 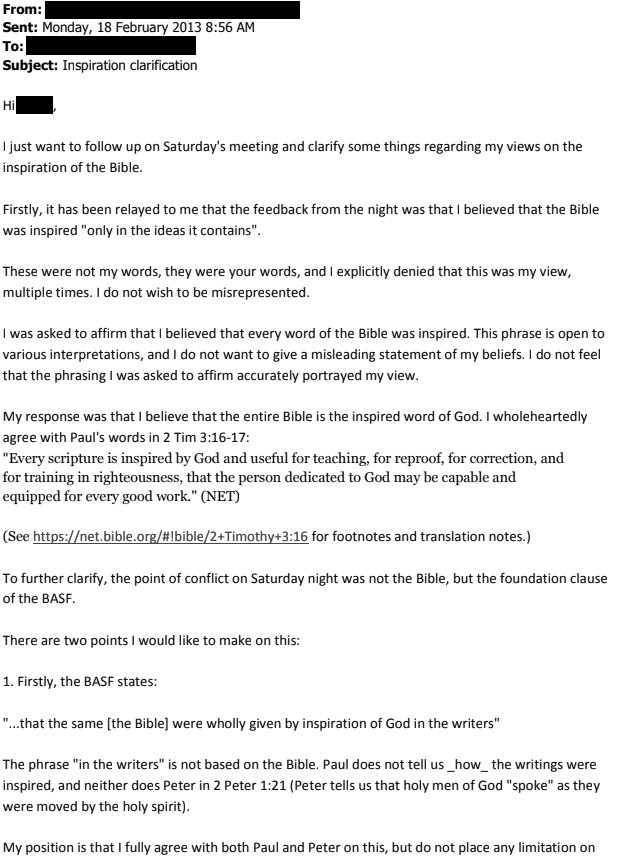 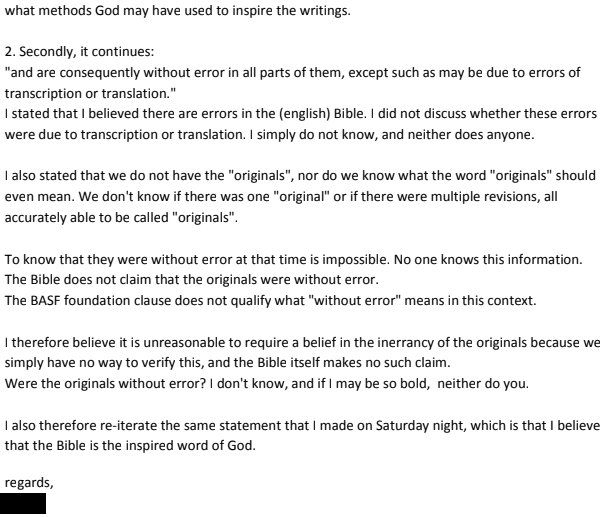 To anyone not familiar with more extreme, "hard-line" Christadelphians, it may seem pretty crazy and weird that I would put so much effort into clarifying what appears to be such a minor and uninteresting point. You may be thinking, "Who cares?!", and you'd be right to think that. It was pretty crazy. But these people clearly care a lot, and when they hold this much power over you and your family, these are the lengths one must go to in order to satisfy them that one is not a heretic and please can I be left alone now.

Perhaps I should have just lied to them and agreed with everything they wanted to hear. But I'm too honest. I couldn't do that. Even the above was more "certain" than anything I actually believed at the time. Clearly I still held some religious belief, but it was clouded in uncertainty and doubt, and I wanted time to sort it out. Instead they wanted to act swiftly because I had mentioned a belief in evolution and they wanted me gone. And not just gone in the sense of a quiet resignation either. The feedback I heard through the grapevine was that they wanted me gone publicly as the poster child for what happens to "evolutionists". I don't know how true that was but there was a witch-hunt for evolutionists brewing at the time so it does ring of plausibility.

One thing that did stand out to me is that in all of this they showed no interest in discussing what the Bible actually said or whether my views were indeed biblically sound. All that mattered to them was that I had not been willing to affirm 100% agreement with a few specific words in the BASF (Birmingham Amended Statement of Faith). It really was that ridiculous and extreme.

And then it got worse

A few days later, on Tuesday 19th February, I received the following document via email. 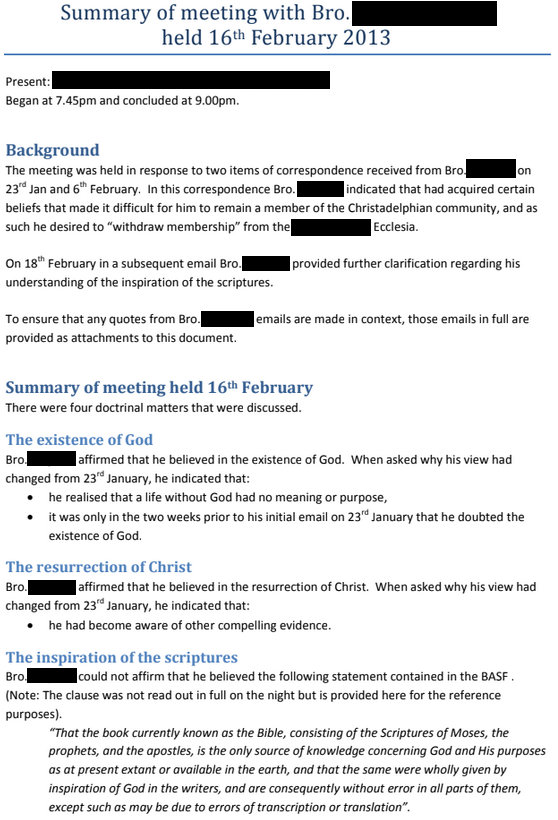 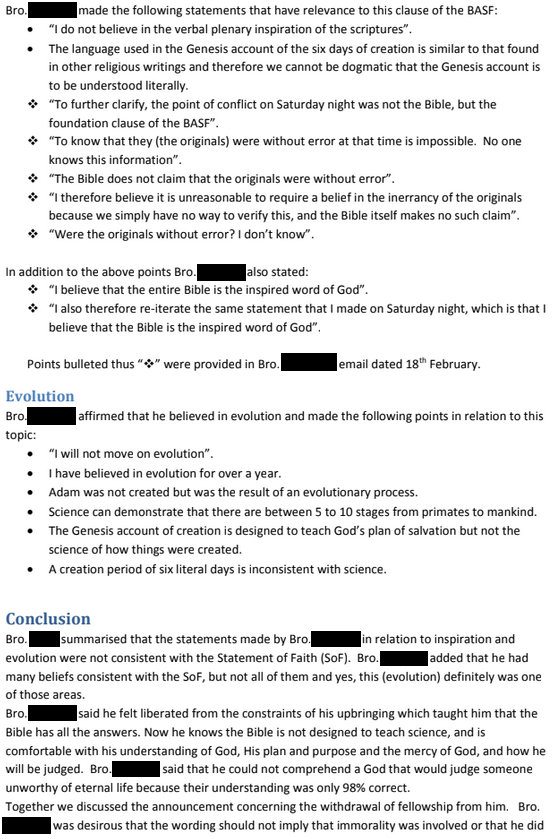 Oh, where to begin! Firstly, on receiving this email I could hardly believe what I was reading. Remember when I said my words would be misquoted and used against me? This was exactly that. I don't know whether they felt that without this document they might not have sufficient evidence to disfellowship me, or whether they felt they were somehow helping the situation, but anyone can surely see that framing this like some kind of legal document and requiring my signature would come across as overkill, manipulative and abusive.

Note also that I received the letter unsigned, meaning I would have been signing it before they did.

Regarding the "existence of God" the letter claims that I had changed my views because I "realised that a life without God had no meaning or purpose". I don't recall using such words at all. While it is true that somewhere along the way I did struggle with finding meaning during that difficult time (understandable, I would think), it seems unlikely to have been the kind of "realisation" that the letter portrayed. It is also false that I had doubted the existence of God for only two weeks. These doubts surely plague the minds of every Christadelphian from time to time. In my case those doubts had become more serious for about a year, but as I'll explain next, I couldn't let them know that.

What was actually the case was that I said a lot of things under duress, also trying to convince them that the only issue was my belief in evolution. I knew they would have difficulty with this (not least because neither of them understood the science at all), and so they in turn tried to pin me down on something else, hence the 4 points that were mentioned. They were trying to claim that my views on inspiration were in conflict, because it would be much easier to disfellowship me on those grounds than potentially (re)ignite controversy over the correct way to interpret Genesis.

All of the direct quotes from my emails regarding inspiration seemed fair, and that was indeed an accurate representation of my views at the time. It's interesting that basically the only accurate things in the entire document were the direct quotations.

The bullet points in the section on evolution, however, are a bizarre mix of things that are obviously true (i.e. "A creation period of six literal days is inconsistent with science") and things that no one familiar with the science would ever say, such as "Science can demonstrate that there are between 5 to 10 stages from primates to mankind". This is nonsense and certainly not something I ever claimed. Only creationists make the mistake of thinking evolution follows a linear path, or that humans evolved from modern primates (they didn't). As far as our lineage actually goes, humans ARE primates, and the other great apes are our cousins. There weren't 5 to 10 stages of anything, because evolution is gradual. Going by comments I made to a friend in a follow-up email, what I may have said was that there are fossils of 5 to 10 other hominid species that have been found (I think I was a little off on the numbers), and this was only something I had mentioned in passing.

I have never claimed that Adam descended from other primates because I have never held that view. At that time I wasn't even sure whether Adam ever existed, and I was only prepared to accept the story as a theological and moral one, not a historical one. I know this because I explained my views in an email I sent to a friend only a few days prior to that meeting. Now, in the meeting I probably didn't actually reveal such skepticism over Adam's existence, but most likely I would have vaguely mentioned that there were ways to reconcile the story with evolution and not gone into detail. I wouldn't have stated belief in a view I have never held. I also never claimed Genesis was designed to teach salvation. I suspect they were putting their own spin on that based on their unfamiliarity with other views on the subject.

The conclusion is simply garbage. Apparently I was "comfortable with how I will be judged". Seriously? This is cult-speak, and a threat at that. They waved the threat of judgement at me as an attempt to make me recant or at least regret my decisions. My unwillingness to debate them should never have been considered a sign of agreement.

You will note the power-trip at the end, effectively saying "any attempt to return to the Christadelphians will have to get past us". Tough talk for a pair of schoolyard bullies. I'm not interested in playing that game.

So apparently I "expressed that I was comfortable with the discussion, tone, and [that I had] been given the time to formally explain his views". Sure, and I suspect many people would say the same thing if the alternative was to continue the traumatic experience I had been through up to that point. I would paraphrase that sentence rather more like "Bro ________ expressed that he was more than ready for us to leave his house."

I never signed the letter, and I let them know I would not be doing so: 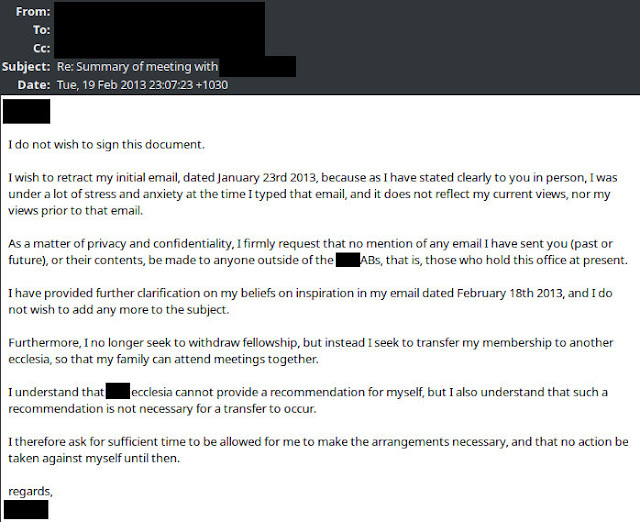 I received no acknowledgement or response from this email, despite sending it to both ABs.

In the last sentence of that email, I asked for more time to make the arrangements to transfer to another ecclesia. That email was sent on February 19.

On February 22, the Recording Brother showed up at my door with an official letter of disfellowship. He looked visibly uncomfortable when he handed me the letter, and I told him I was pretty disappointed with how this was handled and that I didn't want to talk about it any more. What he then said to me made me angry. He said something to the effect of, "Now don't go running away from this". Again, the condescension! I'm not sure if he planned to continue, but I replied, "I'm not running away from anything!", making him fully aware that both he and I knew that I had been bullied. He promptly turned and left. I was hurt by the way I was treated and my family was hurt as well. And he knew it. I could not believe the callousness of this person.

That was the last I heard from the ABs at that ecclesia. Don't get me wrong, I am thankful they never bothered me again. I had suffered enough.

Don't go running away? Really? I asked to leave, because I knew my beliefs disagreed with their Statement of Faith, and was told I couldn't leave. Then I asked to transfer and that request was also refused. Then they disfellowshipped me instead, and had the audacity to tell me not to "go running away"? If that's not a power-trip, I don't know what is.

I no longer have the letter of disfellowship, otherwise I would have printed it here. If my memory serves me, it was short and to the point, and looked like it was printed from a template rather than being specific to things previously discussed. I probably tore it up but if I do happen to find it I will share it.

When I sent that first naive email outlining my doubts and requesting to withdraw my membership, I was already anxious and scared, but I could not have anticipated the hell that followed. I trusted those people. I thought I would be able to quietly leave on my own terms. I expected people might be disappointed or upset, but I didn't expect to be bullied. I think it was the huge mismatch between my expectations and reality that made it so traumatic. I wasn't prepared for any of it.