About 7 years ago, I was disfellowshipped by the Christadelphians.

This is part 2 of my first-hand account of what it was like to be disfellowshipped from the Christadelphian religion that I had grown up in.

If you have not yet read part 1, you can do so here.


The letter of resignation

The next step in becoming more authentic and being open with my beliefs was to write a letter to the Recording Brother of my ecclesia, explaining my doubts and requesting withdrawal of my membership. As has so often been the case in my life I was far too trusting with the information I revealed, and it would later be used by said Recording Brother to testify against me. I had hoped that I would be able to reveal my struggles and doubts, receive compassion and understanding, and be allowed to resign peacefully and on my own terms, much like resigning from a job or from any other community. I was wrong. Very wrong.

The full text of the email is below. I have removed the names for privacy reasons. 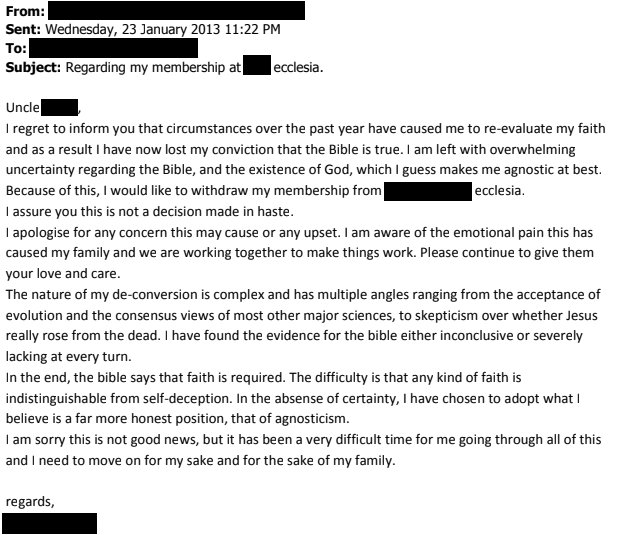 Well, I received a phone call from the Recording Brother in which a face-to-face meeting was arranged between only he and myself. I suspect this meeting was initially intended as a quick, informal meeting to "correct my error" and "put me back on the right path", but the Recording Brother was clearly not prepared for the level of doubt and skepticism I was dealing with, nor did he have any real answers to my many questions. Instead I was met with condescension and expressed disappointment, again as if the mere profession of doubt and unbelief could somehow be considered a moral failing. I did become quite defensive during certain lines of questioning, because I felt like I was backed into a corner. Here was an older guy sitting in my house, (ab)using his position of authority and speaking down to me like I was a lost, naughty child. The discussion was sometimes heated, partly because I felt personally attacked but also because I was still grappling with a lot of the issues discussed and it was greatly distressing to me.

Whatever the intention for holding the meeting, it eventually ended on his realisation that I was serious when I said I had doubts and that I no longer believed like I once did. There were simply too many pieces that didn't fit and I could find no compelling answers to any of it. I was still very vulnerable and raw, however, and in the following weeks some of my views and opinions swung back and forth like a pendulum as I tried to make sense of it all.

Shortly after that initial meeting I had a long discussion with another friend who I had been confiding in for some time, and from there decided to take it slow and re-examine some of my doubts to see if there were things I had overlooked. I wanted to approach the Bible again with fresh eyes and see if I could piece something together. And so in order to buy more time to work through this, I attempted to retract my earlier request to withdraw and instead simply transfer membership to a different Christadelphian ecclesia (one that was more liberal), but this did not go well.

Below is the email I sent requesting the option of a transfer. 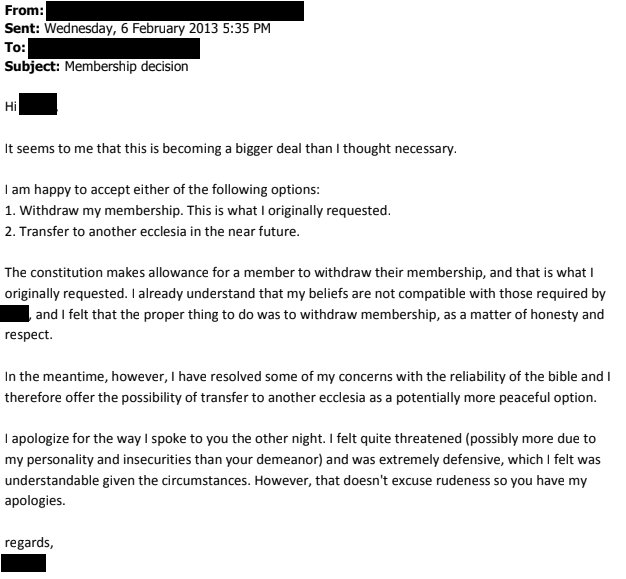 I received very little in the way of acknowledgement or feedback following this.

By this time I was feeling quite stressed, and my family were also suffering as well. I was surprised by the response but still hopeful things could be resolved. My optimism was entirely misplaced, however. Things were about to get worse.

Some friends had asked the ABs to back off a little because of the stress we were under and the impact this was having on our mental health. They knew I was seeing a psychologist for depression and anxiety, but they seemed completely undeterred by any of that. Compassion and basic human decency, it seems, were not among their personal traits.

Your request to leave is denied

I received a letter from the Recording Brother on 11 February 2013, which reads as follows: 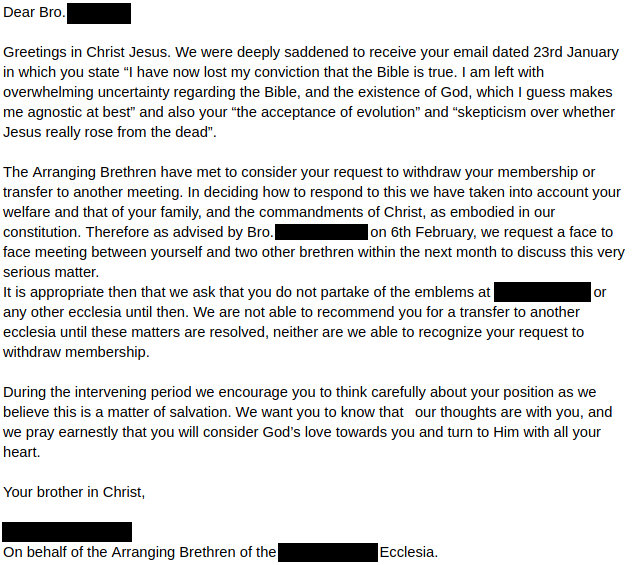 But the worst part is clearly the phrase, "neither are we able to recognize your request to withdraw membership". I ask you, what other organisation in the world would get away with this? But as you'll see, it's not that they wanted me to stay. It's that they didn't want me to leave of my own accord. Oh no, they wanted to (ab)use their authority and disfellowship me. It's the classic, "You can't quit - you're fired!"

And so a meeting was arranged for Feb 16, 2013 between the Recording Brother, another AB, and myself. I think I basically resigned myself to the fact that they were not going to let me transfer to another ecclesia, and they clearly wanted blood. If I remember correctly I told them just to do what they have to do.

So the two of them showed up at my house, and we sat across from each other in the lounge while they effectively "read me my rights" (I jest, Christadelphians don't have any rights, including the right to remain silent). Everything I said would later be literally misquoted and used against me, and this meeting was basically just a formality to tick the boxes and fill out their paperwork. All so they could go back to their ecclesia and claim they followed official protocols.

I remember one of them nervously informing me that my responses left them no choice but to disfellowship me, and asking if I was aware of that consequence? I think he was surprised at how calm I was in answering matter-of-factly that yes I was aware, and it was fine. I knew that once I was free, the bullying would end. If my memory serves me, the meeting was essentially business-like. After the i's were dotted and t's crossed, we shook hands (ironically) and they left.

Now you might be thinking that that would be the end of it. But no, it got worse.